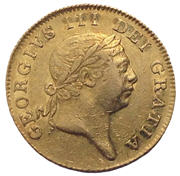 The Guinea is a famous British gold coin minted between 1663 and 1814. The coin was originally created as a one pound coin (20 shillings) but is better known as being worth One Pound and One Shilling (21 shillings).

After the English Civil War, King Charles II introduced new coinage. A gold coin, approximately a quarter of an ounce, was issued and for the first time it was not hammered. Made by machine using gold from the Guinea Coast of West Africa the coin probably became the most important coin of the realm. 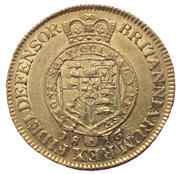 Originally 20 shillings, the coin actually fluctuated with the gold price, at times being as high as 30 shillings. In 1717 the Guinea became fixed at 21 shillings (in today’s money that is £1.05). Other coins of the family were also minted, such as half-guinea, two-guinea and five-guinea.

In the Great Recoinage of 1816 the Guinea was replaced by the Pound and the Sovereign became the gold coin in use. Long after the Guinea was retired the name continued to be used, especially for prestige purchases intended for the more wealthy. Even now racehorses are still sold in Guineas (the auctioneer traditionally taking the 5p as commission).

See our main section on Guineas.