The 2015 Gold Two Pound Magna Carta celebrates the 800th anniversary of the signing of the Magna Carta charter. Signed by King John at Runnymede (near Windsor) in 1215 it is the basis of the many liberties enjoyed even today.

The reverse was designed by John Bergdahl. The obverse is Queen Elizabeth’s portrait by Jody Clark. The coin is created with the Inner as 22 carat yellow gold and the Outer as 22 carat red gold.

Limited edition minting is only 400. It is a wonderful coin and a great investment.

The first gold two pound (£2) coins appeared in 1820 for George III but they were only made occasionally (intended for circulation) until 1980 when the Royal Mint started minting them yearly. There are both proof and uncirculated types in previous years but the modern trend seems to be a proof as part of a set. 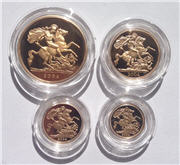 Gold £2 Coins are also know as Double Sovereigns, but as with gold five pound coins there are two variations. One is the double sovereign itself – it looks like a larger version of the sovereign of the same year and is likely to have George and the Dragon on the back. The other type is a commemorative style which tends to copy the circulation two pound design. To avoid categorisation some dealers refer to both types collectively as two pound pieces.

For size comparison, the image on the right shows a modern sovereign set containing the half-sovereign, sovereign, double sovereign and £5 coin.

The specification for two pound coins

Which Mint: The Royal Mint

The Royal Mint is the designated place for the UK to mint coins. It dates back well over 1000 years and is a Government-owned company.

Formed in the reign of Alfred the Great about the year 886, it moved to the Tower of London in 1279 and remained there for over 500 years. The Master of The Royal Mint has included famous figures such as Sir Isaac Newton. Since 2010 it has operated as Royal Mint Ltd, a company owned by HM Treasury, under an exclusive contract to supply all coinage for the UK although it also produces medals and coins for other countries. It is currently located at Llantrisant, Wales.

Queen Elizabeth II has issued many coins and was monarch during decimalisation.

The United Kingdom (UK) is the Union of England, Scotland, Wales and Northern Ireland. It is often refered to as Great Britain (GBR). It has a long, rich history.

It’s orignal coinage was Pounds, Shillings and Pence but since decimalisation on 15 February 1971, it is £1 = 100p, that is One Pound = 100 pence. The coinage of the UK is also a long history, the Royal Mint being established as long ago as 886AD when coins were hammered. Today there is perhaps 30 billion coins in circulation, and many (numismatic) collectors coins and sets are issued frequently in gold, silver and other metals.