The 1859 Gold Sovereign. Ansell or ‘Ansell-Ribbon’ variation. This is a very rare coin (maybe only 15-25 still in existence) when George Ansell tested an experimental alloy of gold. The only noticable difference between this and the standard 1859 issue is an additional ribbon used to tie back Queen Victoria’s hair.

Obverse is Queen Victoria Young Head. Reverse is a Shield.

The ribbon difference is subtle and can be difficult to spot on worn coins. 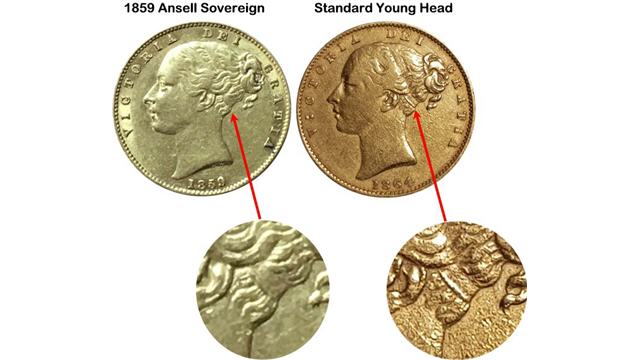 The 1859 Gold Sovereign Ansell is an example of the Gold Sovereign and is one of the most ubiquitous of all coins and much sought after by both coin collectors and bullion investors. Sovereigns have been minted since 1817 (in Britain 1817-1917, 1925 and 1957 on). At coins fairs you often hear the dealers refer to these coins as Sovs.

Besides being minted in Britain, Sovereigns have been made in Australia (Melbourne, Sydney, Perth), India (then Bombay, now Mumbai), Canada (Ottowa) and South Africa (Pretoria) although these regional mints have not made sovereigns since 1932. The non-British coins carry a small mintmark (‘S’,’M’,’P’,’I’,’C’ or ‘SA’) just above the date. This 1859 Gold Sovereign Ansell was minted at The Royal Mint.

The Obverse is the Monarch’s head (Victoria) and the Reverse is most often St George and the Dragon, although other backs have been used and are of interest to collectors. The Reverse often gives the Sovs a new term, like “ShieldBacks”.

With high value coins such as the 1859 Gold Sovereign Ansell, collectors and bullion investors often worry about forgeries but actually gold coins are very difficult to forge due to gold’s unique properties of density and colour. Gold is extremely dense and to use another metal and gold-plate it would result in a coin that is under-weight, over-diameter or half as thick, something that would be spotted very easily. More difficult to spot would be a bullion coin melted down and re-cast as a highly collectable date, but an expert can usually tell these too. You should always use reputable dealers.

Which Mint: The Royal Mint

The Royal Mint is the designated place for the UK to mint coins. It dates back well over 1000 years and is a Government-owned company.

Formed in the reign of Alfred the Great about the year 886, it moved to the Tower of London in 1279 and remained there for over 500 years. The Master of The Royal Mint has included famous figures such as Sir Isaac Newton. Since 2010 it has operated as Royal Mint Ltd, a company owned by HM Treasury, under an exclusive contract to supply all coinage for the UK although it also produces medals and coins for other countries. It is currently located at Llantrisant, Wales.

Victoria was Queen of the United Kingdom of Great Britain and Ireland from 20 June 1837 until her death. From 1 May 1876, she adopted the additional title of Empress of India. Victoria ruled for 64 years, a record only recently surpassed by Queen Elizabeth II.

Victoria’s parents were Prince Edward, Duke of Kent and Strathern and Pricess Victoria of Saxe-Coburg-Saalfeld. She married Albert of Saxe-Coburg and Gotha, who later became known as Prince Albert. Victoria had nine children, the eldest son succeeding her as Edward VII.

The United Kingdom (UK) is the Union of England, Scotland, Wales and Northern Ireland. It is often refered to as Great Britain (GBR). It has a long, rich history.

It’s orignal coinage was Pounds, Shillings and Pence but since decimalisation on 15 February 1971, it is £1 = 100p, that is One Pound = 100 pence. The coinage of the UK is also a long history, the Royal Mint being established as long ago as 886AD when coins were hammered. Today there is perhaps 30 billion coins in circulation, and many (numismatic) collectors coins and sets are issued frequently in gold, silver and other metals.