M J Hughes Coins are always interested in buying and selling coins like the 2010 Gold Proof Crown Five Pounds - Restoration of Monarchy. Selling to me means that you do not have to pay sellers fees, Paypal fees or any other transaction fees. I will give you an immediate offer and pay you the same day. Single coins or entire collection. If you have something and want to sell then please email us or telephone us. 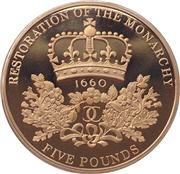 The 2010 Gold proof Crown (five pounds) was issued to commemorate the 350th anniversary of the Restoration of the Monarchy. The Restoration of the English monarchy began in 1660 when Charles II was returned to the throne by Parliament following Cromwell’s period of rule in return for more leniency in how the country was run and changes to the religious setup.

The obverse shows Queen Elizabeth II’s fourth portrait designed by Ian Rank-Broadley. The coin is made of solid 22 carat gold (Gold fineness of 0.916) and has a weight of 39.94g. Only 1,200 gold proof crowns were issued. 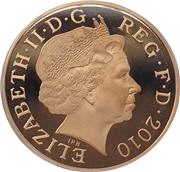 The reverse features a design by David Cornell, depicting a crown above a spray of oak leaves, interlinked ‘C’s and the date ‘1660’.  The inscription is ‘RESTORATION OF THE MONARCHY’ with the denomination in words ‘FIVE POUNDS’ below. The edge inscription reads ‘A QUIET AND PEACEFUL POSSESSION’.

Originally issued by the Royal Mint in an acrylic capsule, presented in a wooden case, with outer black card box. It was issued with an individually numbered certificate of authenticity (COA).

Mintage: 1,200 (may include coins issued as part of a set). Minted at The Royal Mint.
In the Year: 2010
In 2010 there was a General Election in the UK and David Cameron replaced Gordon Brown as Prime Minister. The Conservatives and Lib-Dems formed a coalition. The Winter Olympics was held in Vancover, Canada. 33 Chilean miners were successfully rescued after being trapped 2000 feet underground for 69 days. Barack Obama was US President and Queen Elizabeth II was in her 58th year as Monarch. Spain beat Netherlands 1-0 to win the FIFA World Cup.
General Description: Gold 5 Pound Coin
Not that many people own Gold Five Pound coins, I suppose mainly because they are an expensive coin even in bullion form. Perhaps even fewer realise there are two basic kinds of gold five pound coin. They are very similar, yet distinct.

Often referred to as the non commemorative £5 coin or the Quintuple Sovereign as it is exactly five times heaver than a Sovereign (7.9881 x 5 = 39.94g). As one sovereign is nominally one pound then a quintuple sovereign must be five pounds.

The Gold £5 coin has its history deriving from the five guinea coin right back at the start of the 19th Century. In those days a guinea was valued at one pound rather than the one-pound-and-one-shilling it is often remembered as nowadays. George III, George IV and Victoria all issued actual gold £5 coins and others issued a few too, but Elizabeth II began the surge in production, especially from 1980 onwards. From 1990, the £5 coin was minted in Cupro-Nickel too and silver versions were also available.

The Crown is another English coin with a long history. You may remember the Half-Crown from pre-decimalisation days, but the Crown has been a commemorative coin for as long as we can remember. The Crown was legal tender at a quarter-pound, which was five shillings (25 pence in decimalised money).

In the Eighties we saw the introduction of the pound coin and the two-pound coin, so the Government decided that the crown needed to be restored to it former glory as biggest denomination coin and the crown was re-denominated to £5 in 1990.

This re-denominated was OK by itself, but as a (still) mainly commemorative coin it was soon available not only as Cupro-Nickel but as silver and ... gold. That meant we had a new, official, gold £5 coin.

The only difference between the sovereign gold £5 coin and the gold crown is the diameter. The crown maintained its original diameter of 38.61mm compared to the slightly smaller 36.613mm of the sovereign type.

The re-denominated had other effects too. Whether re-denominated is determined as from this point onwards or backward-compatible is unclear to many. The original crown was a gold coin, so does that mean that Henry VIII's gold crowns were the first £5 coins? So the history of coins starts to rewrite itself in some ways, although if this is intended or correct I'm not sure.

I've noticed many dealers referring to these coins as '£5 pieces'. Maybe it's a way of avoiding the confusion and grouping the coins into the same category rather than having them as two separate entities. Besides the slight difference in diameter (which is difficult to see as most of these coins are encapsulated in some way) there's little to tell.

If the reverse looks like it commemorated something then it's probably a crown. If the reverse is the same as the reverse of a sovereign of the same year then it could be a five pound coin. Whatever, you have a gold five pounds with almost 40g of gold; it's impressive and they are a great investment.

Five pound coins are aften in 4- or 5-coin sets, together with combinations of a sovereign, half-sovereign, double sovereign, quadruple sovereign and maybe some commemorative item or a year-set collectable. They can be bullion, proof or matt-proof.

Despite the high intrinisic value and even higher collector value, five pound pieces are much sought after and are often sold out within days of release causing some of the coins to have a very high price tag.
Which Mint: The Royal Mint
The Royal Mint is the designated place for the UK to mint coins. It dates back well over 1000 years and is a Government-owned company.

It's orignal coinage was Pounds, Shillings and Pence but since decimalisation on 15 February 1971, it is £1 = 100p, that is One Pound = 100 pence. The coinage of the UK is also a long history, the Royal Mint being established as long ago as 886AD when coins were hammered. Today there are perhaps 30 billion coins in circulation, and many (numismatic) collectors coins and sets are issued frequently in gold, silver and other metals.
M J Hughes Coins are interested in buying your 2010 Gold Proof Crown Five Pounds - Restoration of Monarchy! Selling to me means that you do not have to pay sellers fees, Paypal fees or any other transaction fees. I will give you an immediate offer and pay you the same day. Single coins or entire collection. There are a number of ways you can sell to us: