M J Hughes Coins are always interested in buying and selling coins like the 2003 Gold 1oz Krugerrand. Selling to me means that you do not have to pay sellers fees, Paypal fees or any other transaction fees. I will give you an immediate offer and pay you the same day. Single coins or entire collection. If you have something and want to sell then please email us or telephone us.

The 2003 Gold 1oz Krugerrand
Mintage: 41,995 (may include coins issued as part of a set). Minted at The Royal Mint.
In the Year: 2003
Elizabeth II was in her 51st year as Queen. George W Bush is U.S. President. China has its first astronaut in space as Rover Spirit and Oppertuniy head for Mars.
General Description: Krugerrands 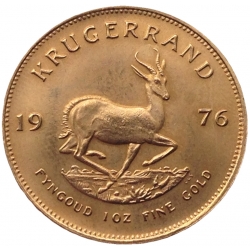 Krugerrands are gold 1oz coins from South Africa. They are very popular with bullion collectors and their price is usually closely associated with the current gold price.

The name is derived from a combination of Kruger (the former South-African president depicted on the obverse) and Rand, the South African unit of currency. Paulus ("Paul") Kruger (1825-1904) who was President of the South African Republic from 1883 to 1900. Kruger was one of the most important people in the history of 19th century South Africa.

The reverse shows the springbok, a medium sized antelope indigenous in South Africa and is a common symbol of the country. The South African rugby team is nicknamed the "Springboks".

Krugerrands weigh more than 1oz so that they can contain a full 1 troy ounce of fine gold.
Which Mint: The Royal Mint
The Royal Mint is the designated place for the UK to mint coins. It dates back well over 1000 years and is a Government-owned company.

Formed in the reign of Alfred the Great about the year 886, it moved to the Tower of London in 1279 and remained there for over 500 years. The Master of The Royal Mint has included famous figures such as Sir Isaac Newton. Since 2010 it has operated as Royal Mint Ltd, a company owned by HM Treasury, under an exclusive contract to supply all coinage for the UK although it also produces medals and coins for other countries. It is currently located at Llantrisant, Wales.
Country of Origin: South Africa
South Africa is officially the Republic of South Africa (RSA) It is the southernmost country in Africa.

The Krugerrand is one of the World's most famous gold coins, being 1oz of fine gold.
M J Hughes Coins are interested in buying your 2003 Gold 1oz Krugerrand! Selling to me means that you do not have to pay sellers fees, Paypal fees or any other transaction fees. I will give you an immediate offer and pay you the same day. Single coins or entire collection. There are a number of ways you can sell to us: