M J Hughes Coins are always interested in buying and selling coins like the 1989 500th Anniversary of Gold Sovereign 4-Coin Set. Selling to me means that you do not have to pay sellers fees, Paypal fees or any other transaction fees. I will give you an immediate offer and pay you the same day. Single coins or entire collection. If you have something and want to sell then please email us or telephone us.

To commemorate the 500th anniversary of the gold sovereign, a completely new design was created for the 1989 sovereign series. A design similar to that of the first gold sovereign issued in 1489 was chosen.

For the obverse impression, a representation Of Ourself as at Our Coronation, seated in King Edward's Chair, having received the Sceptre with the Cross and the Rod with the Dove, all within the circumscription 'ELIZABETH.II.DEI.GRA.REG.FID.DEF' can be seen.

A small circled 'U' below King Edward's Chair on the obverse means the coin is of BU quality. 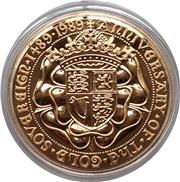 The reverse depicts a Shield of Our Royal Arms ensigned by an open Royal Crown, the whole superimposed upon a double Rose (Known as the 'Tudor Rose'), and with the circumscription 'ANNIVERSARY OF THE GOLD SOVEREIGN 1489 - 1989'.

Both the obverse and reverse designs were created by Bernard Sindall.

The coins are presented in a Royal Mint wooden case, accompanied with an individually numbered certificate of authenticity (COA).

Minted at The Royal Mint.
General Description: Gold 4-Coin Sets
Which Mint: The Royal Mint
The Royal Mint is the designated place for the UK to mint coins. It dates back well over 1000 years and is a Government-owned company.

It's orignal coinage was Pounds, Shillings and Pence but since decimalisation on 15 February 1971, it is £1 = 100p, that is One Pound = 100 pence. The coinage of the UK is also a long history, the Royal Mint being established as long ago as 886AD when coins were hammered. Today there are perhaps 30 billion coins in circulation, and many (numismatic) collectors coins and sets are issued frequently in gold, silver and other metals.
M J Hughes Coins are interested in buying your 1989 500th Anniversary of Gold Sovereign 4-Coin Set! Selling to me means that you do not have to pay sellers fees, Paypal fees or any other transaction fees. I will give you an immediate offer and pay you the same day. Single coins or entire collection. There are a number of ways you can sell to us: