M J Hughes Coins are always interested in buying and selling coins like the 1926 Gold Sovereign South Africa. Selling to me means that you do not have to pay sellers fees, Paypal fees or any other transaction fees. I will give you an immediate offer and pay you the same day. Single coins or entire collection. If you have something and want to sell then please email us or telephone us.

Besides being minted in Britain, Sovereigns have been made in Australia (Melbourne, Sydney, Perth), India (then Bombay, now Mumbai), Canada (Ottowa) and South Africa (Pretoria) although these regional mints have not made sovereigns since 1932. The non-British coins carry a small mintmark ('S','M','P','I','C' or 'SA') just above the date. This 1926 Gold Sovereign South Africa was minted at The South African Mint.

The Obverse is the Monarch's head (George V) and the Reverse is most often St George and the Dragon, although other backs have been used and are of interest to collectors. The Reverse often gives the Sovs a new term, like "ShieldBacks". 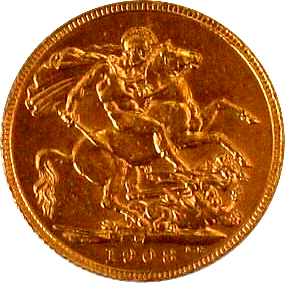 With high value coins such as the 1926 Gold Sovereign South Africa, collectors and bullion investors often worry about forgeries but actually gold coins are very difficult to forge due to gold's unique properties of density and colour. Gold is extremely dense and to use another metal and gold-plate it would result in a coin that is under-weight, over-diameter or half as thick, something that would be spotted very easily. More difficult to spot would be a bullion coin melted down and re-cast as a highly collectable date, but an expert can usually tell these too. You should always use reputable dealers.

Which Mint: The South African Mint
The South African Mint Company Limited is the official mint of the Republic of South Africa. Headquarters are in Centurion, Gauteng Province near Pretoria. The mint manufactures coins on behalf of the South African Reserve Bank
The Monarch: George V (1910-1936)
George V was King of the United Kingdom and the British Dominions, and Emperor of India, from 6 May 1910 until his death in 1936 and was King during World War 1. George was the second son of Albert Edward, Prince of Wales (later King Edward VII), and grandson of Queen Victoria. After his death he was succeeded by his eldest son, Edward VIII.

In 1919-20, the Silver price rose dramatically so .925 silver coins began to made in 0.500 siver. Gold Sovereigns were produced in large quantities early in George's reign - over 30 million in 1911 and again in 1912, although there was no bullion sovereigns issued 1918-1924 (Commonwealth mints did continue mintage).
Country of Origin: South Africa
South Africa is officially the Republic of South Africa (RSA) It is the southernmost country in Africa.

The Krugerrand is one of the World's most famous gold coins, being 1oz of fine gold.
M J Hughes Coins are interested in buying your 1926 Gold Sovereign South Africa! Selling to me means that you do not have to pay sellers fees, Paypal fees or any other transaction fees. I will give you an immediate offer and pay you the same day. Single coins or entire collection. There are a number of ways you can sell to us: